“Mr. Ford was one of the most remarkable ordinary people Toronto has ever produced.”

Here’s another perspective; you decide:

To create and solidify their base, Ford and his backers used a strategy that has proven successful elsewhere. It is a strategy that worked well, at least for a time, for George W Bush, for instance: playing up a persona that people make a personal connection with. Let’s call it the blue-collar-lunch pail-millionaire phenomenon — a persona ironically co-opted by men who never worked a blue collar job in their lives. But it conveniently divided and conquered to send Ford to the Mayor’s seat. It pitted the so-called “elite” — the intellectuals, the artists, the environmentalists, even the unionists — against the other supposed “ordinary” citizens of the Greater Toronto Area. Downtown versus the ‘burbs.

Ask an intriguing question, politician spins or lies or evades or trots out talking points, then Evan…what does he do? Move on. Nothing to see here.

The world is better off with him off the air.

Today is a terrible day for gender equity in sports. What it looks like is either continued sexism, or increased anti-feminist backlash against women who have been asserting their human rights to safety and dignity around the world.

That’s twice in two years that the Australian media are living down to their country’s stereotype of sexist pigs while interviewing her.

I wonder if this media fellow was pondering what he could get her to do and settled for a twirl.

Bouchard later said, “I don’t know, an old guy asking you to twirl. It was funny,” she said. NO ONE should be put into this idiotic position.

This continues to be intolerable! 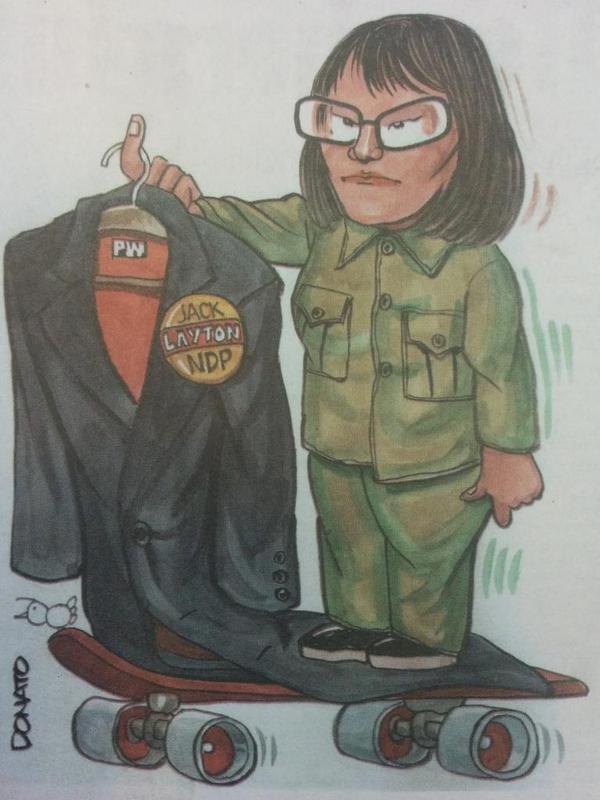 That makes them either stupid, or so incredibly biased/conflicted that they are willing to ignore science and dodge accusations of their own stupidity to accomplish some other goal.

In BC we are producing oil, gas and coal and stunningly stupid rates, only to go up in the future.

Our corporate media is spewing this “false balance” at us. Journalists who deny the scientific truth of climate change should be fired. But corporate media want to keep them on.

We need to continually inoculate our against this wilful ignorance.

Have you joined yet?

No? So, you’re good with corporate media spinning things for you, against your personal, community, national and ecological interests?

Ricochet is an audacious response to a difficult context. Independent and in the public interest, Ricochet will provide a space dedicated to investigative journalism and high-profile opinion. Published in two distinct editions, English and French, Ricochet will illuminate the cultural and political diversity of this country.

It doesn’t matter because the internet of things.

It doesn’t matter because most of what’s important in the world is in the comment section of news stories, not the stories themselves. We all know journalists are biased anyways.

She is a public intellectual and deserving of respect. Maybe you’re all just jealous. Or lazy.

Stephen Harper wrote a book about hockey in Canada, A Greater Game. It’s a sociological book about hockey’s place in our culture. It doesn’t matter that Stephen Harper doesn’t believe in sociology. In his book he talks glowingly about French Canadian hockey stars so he can improve the party’s chances in Quebec in the next election. He also talks about how important it is to privatize the CBC by making sure they didn’t bid on renewing the theme song to Hockey Night in Canada, and then didn’t bid to keep the entire Hockey Night in Canada franchise. So now Rogers runs hockey in Canada. He described why that was really important. He ended his book with a review of the great young NHL prospects from his riding in Calgary-Nose Creek.

So if you get over your laziness and jealousy of Margaret Wente, go to WordPress.com and start your own blog, you too can contribute meaningfully to the national discourse instead of wasting so much time attacking the National Post‘s greatest columnist.

When I write about soft fascism, I sometimes feel too Canadian. I don’t want to be impolite and talk about hard or old school or 20th century fascism because frankly, when people read that word, they think, “hey, is he talking about Hitler kinda stuff? Ok, then, so it’s not fascism.”

It is though. You don’t have to start a genocide for someone to consider your actions fascist.

It’s a kind, gentler, Canadian-style fascism with a hit of Tom Horton’s and a bonspiel on TV in the background.

Attempts to suppress democracy, though, ARE fascism. From the Conservative government’s voter suppression actions, and contempt of legislature and the courts, they seek totalitarian power.

This is why I Occupy.

And while we figure out what Occupy Vancouver is going to look like going forward, it is this kind of work to decriminalize journalism that we need to be mindful of. See below.

Now, more than ever, because there’s a federal election brewing and we know that the federal government will cheat again to keep its power because it thinks it’s right and they know best for all of us. Like the BC government’s election gag laws and the city of Vancouver’s pre-Olympics and Occupy era democracy suppression measures.

We can be vigilant or we can be sheep. If you want to be a sheep, fine. Stay away from me. If you want to be vigilant, sign up for email updates over there on the right. We’re all about vigilance around here. And I believe Stephen Harper is mentally ill, WITHOUT even having seen the Flanagan interview from Friday night.

And we’re about making Occupy potent, and unlike the governments, transparent and accountable and democratic.

Share on facebookShare on twitterShare on emailShare on pinterest_shareMore Sharing Services6

“Canadians have lost even more ground in one of the fundamental elements of free expression—the ability to know what their government is doing and why,” says a news release issued by Canadian Journalists for Free Expression. The CJFE has just issued its 2014 Review of Free Expression in Canada and it gives the Canadian government “a failing grade.”

Access to information law means any Canadian can apply for access to any government document for a fee of five dollars. “It’s something that’s absolutely critical for the functioning of Canadian democracy because it helps to keep Canadians informed. It’s crucial for investigative journalism,” says Tom Henheffer, executive director of the Canadian Journalists for Free Expression.

“The fact is the government is intentionally dismantling it. They’re defunding access department so when someone files a requests there’s no response. Eighty per cent of documents that do come back are censored, many of the heavily censored,” says Henherrer, noting that there has been a 51 per cent increase in complaints about missing records in the past year.

‘A growing culture of secrecy’

“Even worse than that is the fact that there is this growing culture of secrecy in government, both federally and provincially and in some municipalities,” says Henheffer. He says politicians and civil servants are deliberating not keeping records, avoiding e-mail and sending messages from BlackBerry to BlackBerry that are erased every 30 days.

“In the past Canadians have had a robust access to essentially the decision-making process that goes into forming policy in Canada and that access is being taken away.”

Surveillance of citizens is another major concern listed in the review as well as a lack of any effective protection for whistleblowers. Henheffer says civil servants who flag problems in government lose their jobs. “That’s why we have such a culture of secrecy, part of the reason why, because we don’t have this protection so people aren’t coming like say Edward Snowden (American intelligence contractor who leaked documents revealing widespread surveillance of citizens by U.S. spy agency). We don’t have anyone like that in Canada because the sacrifice that they would make is too great and as a result we don’t know what we don’t know.”

And you don’t have to do them all, you just have to start with a few.

Chances are, though, that you already do some of this. Click here, you’ll thank me:

“Never have I seen such a perfectly exquisite – and devastating – deconstruction of a ‘journalist.’”

via Watch This Perfect Dissection of Grief Lamprey Nancy Grace From HBO’s ‘The Newsroom’ – disinformation.